Ok I have Day 1 of the new role at work behind me...my head is spinning. After 6 years of doing the same thing day in and day out, it's hard to be fresh off the teet to do something brand spankin' new, ya know? Training drained me severely -- to the point that I was mush by the time I got home Friday night, which sorely dampened my plans for the weekend, I'm afraid. I could have taken Mom to Nova Scotia to celebrate my aunt & uncle's 40th Anniversary Party. I could have attended Lana's dancing birthday party, but I ended up being the Queen of Party Poopers and bailed on it all. Happy Anniversary Wayne & Celine!! Wishing you many years of continued happiness! Sorry I missed dancing with you Lana - I hope you had a great night!!

So, on account of feeling poorly, I did little else this past weekend other than loaf, sleep, loaf, and sleep some more. I did, however, have an opportunity that I could not pass up - and that was to attend a house concert this weekend with Irish Mythen. I almost opted out of that as well 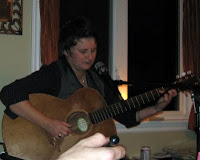 on account of how poopy I was feeling (as in Chris waking me up from a nap with literally 13 mins to decide if I was coming or not)...and despite a few waves of nausea, I made it through. We had seen Irish perform for the first time during Matt's show in Saint John. She's been compared to Matt actually - a female version. I can see how she gets the claim. At 4'11", you wouldn't think a person of her stature would pack a punch like she does, but she's a complete powerhouse! She can wail like nobody's business; she's soulful, energetic, and her songs touch your heart. It was a complete joy to be there. And the setting of this 'house concert' thing was amazing. Basically it's the same as any other concert - with a cover, sit-down venue, etc...but you're amongst people who want to be there, and who will sit down and shut up through the entire performance. I hope to be able to attend many more concerts of this nature. Thanks for sharing your talent, Irish! :)

Sunday I was starting to feel a lot better, and in between more napping and catching up on my taped TV, I finally managed to clear the way to my closet and put the piles of clothes away. I still have about 3 or 4 loads of laundry I could have done, but they'll just have to wait. I hope you all enjoyed a good weekend - and I hope yours had a bit more excitement and flair than mine did :)