Along came the spiders...

It started out like any other Friday.  I was working the late shift that day, but despite the later start time, I, as usual, left it to the very last second to leave the house. Upon reaching the driver door I noticed a cluster of evil perched between the driverside mirror and the door itself.  I was too panicked to take a photo with my phone so the googled image here will have to be enough of a descriptor for you: 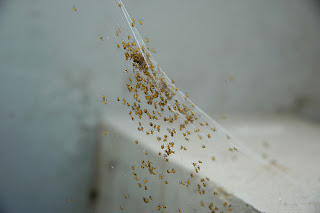 A baby spider, on its own isn't overly threatening. No.  But when you get seventy-billion in a cluster like that, the threat grows exponentially.  All I could think about was ridding the car of the threat.  I quickly rummaged around in my purse for something to help...nothing.  I carefully opened the door and grabbed a napkin.  Working quickly, I separated the nest from the car, threw the napkin down to the pavement with excessive force, and stomped furiously on it.  Some attempted to escape, as I could see little things moving all around the napkin and by my foot, and to my horror:  ON MY PERSON.  Yes, there was also a number of them walking up my pant leg!!  Using the opposite foot I tried to dispose of the threat.  I shimmied around and batted at my leg with my other foot. Upon nearly losing balance, I then opted to remove my sandal to actually beat them off me.  Redneck Highland jig, several shrieks, and sandal-beating later, I felt satisfied that I ridded my person of the threat and then got in the car (of course my brain still felt them crawling; all over me, I could feel them all.over.me.).

Secure in the safety of the vehicle, I noticed that my initial napkin scoop hadn't really finished the job.  There were several all over the window.  Now what I'm about to tell you is VERY IMPORTANT.  Take heed.  Learn my lesson.  If you find yourself in the middle of a similar predicament, DO NOT, I repeat, DO NOT,  OPEN THE WINDOW!  The fact that I'd just had a family of baby arachnids on my person no doubtedly hampered with all reason and sensibility because I opened it.  I opened the god-damned window.  Suddenly, a whole new crop of baby spiders were now crawling INSIDE MY CAR, down the window and down the door, trying to get back to my person!  I shrieked, flew the door open and then grabbed my sandal to do my best at slamming and bamming them into smithereens.  When the sandal stopped working, I grabbed a handful of napkins to finish the job (the only good thing about them being baby spiders is they were too small to be juicy. And, God bless the drive-thru staff at Dairy Queen for their heavy napkin hand).

Fighting the urge to run back in the house to shower I had to go to work; time was ticking and I would be lucky at this point if I even made it there on time.  Parked, I then enlist the help of another night shift arriver to give me a once-over. She said she didn't see any.  I still felt them crawling.

I made it to work on time, and I got through my shift despite ending it with a few less layers of skin from the scratching.  And only 1 more baby spider had to be sacrificed from the inside of my car that night.  I haven't yet quite figured out a new plan of attack if I'm faced with a future car nest. Other than never, ever opening the window again. Ever.
Posted by Amber at 12:38 No comments:

...climbed up the waterspout...

Might I just add that NOT long after the sink spider incident, I discovered the following ginormous creature in the bathtub! 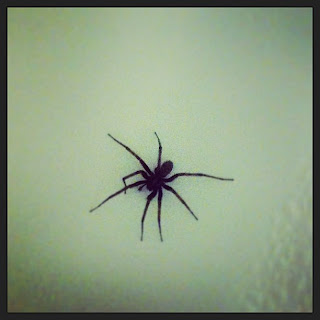 Proof to my theory that those icky, disgusting things live in the deep, dark depths of the drain pipes.  Chris wasn't home when it reared its girthy frame so I knew I was on my own.  I DID, however, attempt to coerce Bosco to be the saviour of the day.  He and Zoe both do enjoy playing with the odd creepy crawly.  As Zoe's *ahem* stature isn't condusive to quick-play, Bosco won the choice in cat, and I thought I'd likely be home free.  I grab him, coax him into the tub, asking him to, "Get that spider for Mummy!! Get that spider!!".  Bosco immediately made an extremely hasty retreat from the tub as fast as he left my arms.  It was as if I'd introduced him to the devil himself.  Not wanting to take the chance on another fail, I opted out of grabbing Zoe from her slumber, and instead grabbed the nearly-full 1.5L bottle of shampoo and went to work.  The death was fairly quick, but I did mush a few extra heaves at it with the bottle.  When I was convinced the spider could not reincarnate I then took an empty toilet paper tube and flicked him from the bottom of the shampoo bottle into the waiting toilet bowl and sent him a-flush. You can never be too sure, ya know.
Posted by Amber at 11:59 No comments:

Email ThisBlogThis!Share to TwitterShare to FacebookShare to Pinterest
Labels: i hate spiders, spiders, things that creep and crawl; ewww

Though we're smack dab in the middle of Tropical Storm Gabrielle and the high humidity that's accompanying it, there's no question that summer has bid us it's untimely adieu.  In retrospect I have a few tales to tell about one of the few unsavory things that come along with summer. Namely bugs. Nasty, creepy, crawly, icky, disgusting bugs!

I sat on the living room couch one morning, sipping on my coffee and watching the news when Chris very calmly said, "Amber? What would you say if I told you that I saw the biggest spider that I've ever seen in my life?".  I returned that with a, "I'd say KILL IT!", followed by a narrowed-eyed, "Where?!?!".  A very calm, "Right here. In the sink", and he points, and actually steps back a little.  I grow slightly more panicked at this point, adding a bit of a begging tone to my, "Kiiiillll it!!".  Chris' suggestion to end the spider's existence in our kitchen sink?  Running hot water and drowning him.

Well no. That just will NOT DO.  Number 1, there's no way you can get the hot water to reach temperatures high enough to cause life-ending scalds to the thing. Number 2, how do we NOT know that the little effer didn't climb up the drain hole in the first place, thus proving it's ability to withstand the hottest of our hot water temperatures, and also cementing the fact that they CAN SWIM.  There was no way I could take the risk that he could simply be offered a flume ride down to its humble abode. NO!  We had to ensure that there was no risk of the possibility that he could crawl back up there and make its way out of the sink. And there was only one solution.  The man of the house had to nut up and be the one to do the killing.  They only problem?  He was convinced his idea was the winner.  And I could have nothing to do with that.  I had to be the bigger person and ensure there was no risk of that thing returning and crawling over my face at night or nesting in my ear (actually, he was too big to do such a thing; it never would have fit in my ear).

So I push up my sleeves and approach the sink - only one goal in mind:  to get that sink spider dead.  He was so big there was no doubt in the world that he'd be juicy and go down with a fight, so I had to ensure that my hands didn't do the killing.  I first enlisted a sufficient ream of paper toweling which I coated the spider with, then grabbed the dish soap bottle with the thought of smushing it to smithereens. Unfortunately the keen arachnid just hid in the small hollow between the middle of the bottle bottom and the sink.  Chris laughed.  A few seconds of panic followed before I realized that the best kill tool would be the sharp-bristled scrub brush. Yes!  That would do.  I took a bit of the paper towel cushion away and proceeded to jab and stab at it, forcing an albeit messy, but successful demise of the sink spider.

An alternate description, in the words of Christopher, courtesy of Facebook:

Me: Amber, there's a giant spider in the sinkSpider: DUDE! Help! I can't get the fuck out of here, I can't climb the walls!
Me: that's bad dude, Amber doesn't like spidersSpider: help help help helpMe: want a hot shower?
Spider: no! that will kill meAmber: don't wash it down the sink, it will come back!Spider: come back and do what? I can't climb the fuck out of the sink!
Me: I've selected the method of death for this spider, if I can't kill him this way, you'll have to do it.Amber: (grabs 18 feet of paper towel, throws it on the spider, and then hits the four inches of cushion with the dish soap bottle)Me: laughingSpider: missed me, I'm going down the drain! YOU'LL NEVER CATCH ME!Amber: No you're not. (grabs scrub brush, throws down less paper towel cushion) die die dieSpider: silenceMe: laughing stillAmber: wipes up spider goo with 18' of paper towel

Moral of the story:  Chivalry is dead. And spiders are gross. And don't belong in kitchens.

Stay tuned, the bug tales are not over.
Posted by Amber at 13:15 No comments: