Love can be fickle.  Love can be fragile.  When you find it, it's truly the best feeling in the world.  Some days it's easy to take for granted what is the most awesome in your life.  We don't mean to do that, just, sometimes, life can get in the way.  Today's quote of the day is brought to you by the wise Bob Marley, and is dedicated to Christopher.  Thanks for loving me, babe...I love you to the moon and back... xoxo:

"You may not be her first, her last, or her only. She loved before she may love again. But if she loves you now, what else matters? She’s not perfect - you aren’t either, and the two of you may never be perfect together but if she can make you laugh, cause you to think twice, and admit to being human and making mistakes, hold onto her and give her the most you can. She may not be thinking about you every second of the day, but she will give you a part of her that she knows you can break - her heart. So don’t hurt her, don’t change her, don’t analyze and don’t expect more than she can give. Smile when she makes you happy, let her know when she makes you mad, and miss her when she’s not there."
- Bob Marley
Posted by Amber at 13:44 1 comment:

"If you do the same thing and expect different results, that's when insanity begins"

Oh the drama!!  The best place for Rachel was hiding in the bushes.  She's such a whiny child!  It's too bad that Jordan was such a committed game player.  I think it would have been hella interesting to see the look on the Branchel's face if she had back-door'd them tonight!  At least Rachel didn't win veto, and she still has to eat the slop.  I might have clapped my hands together in glee when she slipped off the beam the second time.

"It's the best when the ordinary is extraordinary"*

A few observances as I watched last night''s episode online this evening:
*yawn*

*figured I owed the broken-hearted Ames a bit of a tribute so the post title is a quote from under the magnolia tree; guess he wasn't ordinary enough. And BONUS - it can serve as my quote for "quote Tuesday", too.
Posted by Amber at 21:57 No comments:

You're probably wondering where the BB posts are, aren't you?  Yes, I am indeed watching.  It's not really summer til BB starts :).  I did a complete 360 from complete elation at the returning veteran houseguests, namely the return of my beloved Evel Dick - to utter disappointment that he had a surprising & quick exit from the house.  Obviously it was for a very important reason that he opted to leave, but his presence will definitely be missed.  I hope that Daniele can reprise the Donato fortune this season as well, and show us all a double-win.  With both Jeff & Jordan also there, I'd also be happy if they were back to claim the prize (either one), as well. 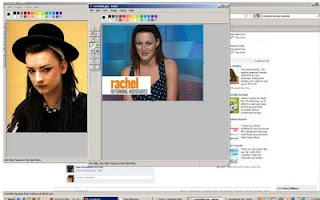 Now, on to Brachel, or Branchel, or whatever you want to call them...how about the "Demasculinating" Duo? (Attention Rachel & Brandon....that AIN'T a word!!  I believe the term you were searching for may have been emasculating? *rolls eyes*).  Despite being really hard to love, they do spur on a great deal of drama, so they make the show fun.  I definitely don't want them to win, but I'll be okay if they last a little bit.  They're the type of people that you love to hate, ya know?  I can't believe he proposed to her...suppose they definitely are made for each other.  *shrug*

For the longest time, I was puzzled as I looked at Rachel, wondering to myself, 'Who does she remind me of??!?'  Thanks to a friend on FB, who hit the nail right on the head, BOY GEORGE!  Hmmm....we haven't heard much about BG for a long, long time...Same person, perhaps? Click on the picture to make it bigger and really get a good look at the two.  Hahaha :).

It's too early to have formed too many opinions of the newbies, but here are a few:
Have you been watching?  What are your thoughts (SPOILERS UNWELCOME!)
Posted by Amber at 13:00 No comments:

"the offspring of an ostrich and Elton John..."* 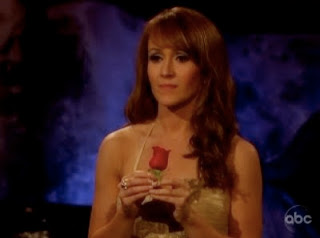 I owe you a few Tuesdays' worth anyway, so even though I already posted a quote for today, after finding this one, I figured I'd post it instead of saving it:


"I believe things happen for a reason. People change so that you can learn to let go, things go wrong so you can appreciate them when they're right, you believe lies so you eventually start to trust no one but yourself, & sometimes good things fall apart so better things can fall together." ~ Marilyn Monroe

"When life gives you a hundred reasons to cry, show life that you have a thousand reasons to smile". ~Author Unknown
Posted by Amber at 12:04 No comments:

In the maze of life there are many twists and turns - each turn a new decision, the place where that turn leads offering more direction to go. Years ago, we all started out walking along the same path.  We laughed over silly things; we cried over boys; we experimented with different things; we promised each other that we'd be "BFFs" forever.  We set out on our journey then, traveling together, arm in arm, until we came to a big, thick door.  Beyond that door there were rattles, pureed vegetables, diapers, and drooling, wide-mouthed babies. I chose to walk past that door.  Everyone else walked through.  A few were hesitant.  A few knocked lightly before gracing the threshold with slight hesitation.  A few had trouble with the lock, but finally managed to open the door wide and ready.

I didn't knock; I didn't ask for a key.  For a brief minute, I stood outside that door and I fought with the idea of tapping it lightly, but then I opted to walk past, and I haven't looked back.

The trouble is, I looked behind me, and there wasn't anyone behind me.  I could hear the faint laughter and shared companionship in the distance, behind the door, paces down the hallway.

I haven't forgotten about you, I swear....

I don't have a good excuse for leaving you for 10 days.  You can blame the damn wrist!  I have been very achy lately and the thought of sitting down and typing hurts me before I even try it.  If I didn't have to type for a living I might get somewhere....hello, Lotto? Yes, I could sure use you.  You're busy right now? Ok, well, can't knock a girl for trying...

Sooo...it's summer - finally :).  We knew it would get here, we just had to have a little patience.  Here's a list of a few sure-all signs of summer, for me at least:

- the glory that is the a/c (hey, I'm a MUCH happier person when I'm not dripping in humidity sweat, trust me)
- fresh PEI strawberries!
-the pop-tart tan of 2011 is coming along nicely
-bug bites (I swear an entire chunk of my arm was bitten off)
-music, music, music!  Including attending the Summerfest show on July 3 with Haywire and Meatloaf (thanks Lana!), and 1, possibly two, Matt Andersen concerts to go, and one for Irish Mythen.  We're also marked as a very possible maybe for an Ian Sherwood house concert, too.  Can't beat live music!

I've yet to dip my toes into the sand, nor enjoy a beverage on an outside deck... thankfully, the summer's not yet over :).  Hope your summer is passing along swimmingly!!
Posted by Amber at 09:32 No comments:

Email ThisBlogThis!Share to TwitterShare to FacebookShare to Pinterest
Labels: summer 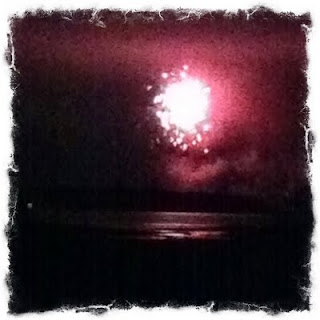 Happy Canada Day!!  This year was the first year in four that Chris wasn't working.  We slept in, went into town to do a few errands, had fries out of a fry truck, stopped in at the park to see some of the Canada Day festivities (including seeing a number of people we hadn't seen in ages), and we hung out for a bit with Matt & Nicole at our place.  Matt & Nicole were pretty beat, so they left at about 8pm.  For a while, it looked like we might skip out on the fireworks.  At about 9:30pm our grumbling bellies forced the decision that food was our priority, and on our way to get food, Chris made the spontaneous decision to go straight instead of heading into town, and we ended up parked on a cottage lane in Cornwall, across the water from Victoria Park.  We parked, sat & snuggled on the tailgate of the Element, and had a perfect view of the fireworks!  Since Chris had the forethought to park backwards, on the other side of the road, we were able to be one of the first cars out of there, too, beating all traffic.  We ended up at Pizza Delight in Cornwall for a late supper, then landed home to crash.  It was a pretty quiet Canada Day, but it was still a memorable one.  Hope you all enjoyed your own day, celebrating what a wonderful country we live in!  Happy 144th Birthday, Canada!

*crappy photo from Chris' iPhone -- sooo far away from the action, but we saw them all.  It was way more romantic cuddled up on the tailgate than fighting traffic from town back home :).
Posted by Amber at 23:56 No comments: