Chris woke me up this morning to tell me he figured he finally needed to put him down. He suspected perhaps he'd had a stroke through the night...one side of his body didn't seem to move. He'd been getting sicker and sicker for the past few months - losing so much weight. He still seemed to have an appetite and drank well, but he was nothing but bones. Chris never wanted to play God and put him down, but today it was such a sad sight, it felt like the only humane thing to do.

He called the vet and made an appointment. I left them to go have a shower.

In the time it took for me to have my shower, he'd died in Chris' arms.

As long as Chris and I have been together, Homer's been around. He didn't do much....what do bunnies do, really? He was a Himalayan dwarf rabbit. A real cutie. He loved raisins, jelly beans and Nibs. Sometimes we'd let him out of the cage for him to get some exercise. It was hilarious when we lived in the apartment because he'd do this little run and skip thing - I called it his 'frolic'. It looked like he was clicking his heels together. He didn't do it much here on account of there being no carpet. He couldn't get much traction on the laminate. He did try though. Chris would put an old quilt down and he frolicked a bit on that. He used to take forever to get a drink from his water bottle...and the clicking sound he'd make doing it used to drive us nuts. He used to take his food dish and bang it up against the bars of the cage to get our attention..."uh...hey guys, my dish is empty...". Chris put super strong magnets on the dish to try to keep it in place. Somehow, he always seemed to manage to get it free though.

The floor looks really empty now where the cage once stood. As much as it drove me nuts, I'll miss that clickety sound he made when he got a drink.

I really am going to miss the little guy. 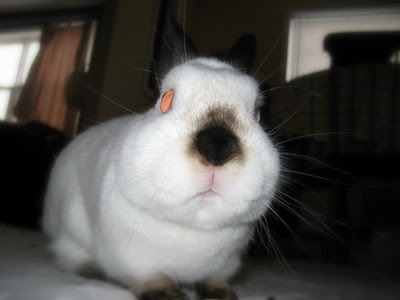