Here it is, the night we've all been waiting for...the top 3 ladies, and the overnight dates.  They have all flown to Switzerland for a romp, and the show begins as Ben recaps his feelings for the girls left standing: Nicki, Lindzi-with-a-zee, and Evil Courtney.  He expresses that he's, "motivated to ask questions he's afraid to ask, and dig deeper" (overnight dates, of COURSE he wants to dig DEEPER.  Okay, that was crass, right? Sorry).

Nicki's date is up first, and they hop on the chopper again and soar through the snow-capped alps, perching atop of one to sit for a quiet picnic.  Gotta admit, she appears pretty smitten... The sun sets, and they make their way inside a candlelit log cabin where they promptly decide to forego their individual rooms, and hunker down into the fantasy sweet amid candles, fire, bubbles and passion.  Boy oh boy is her heart going to be shattered if she's not the last woman standing...

Lindzi-with-a-zee with her powdered sugar lips is up next (of COURSE they again leave Evil C for the very end), and they begin their date repelling 300ft down into a gorge. I felt like I was going to barf just watching the camera pan downward.  Again, in true Bachelor-fashion, they bring back the famous metaphor of experiencing such a frightening undertaking proving how they can beat the odds and blah, blah, blah (insert HUGE eye roll)... and, a Bachelor first, Ben admits that he "loves" her during his camera time. Ben dons his crooked green bow tie, and they share supper, thoughts, and the overnight proposition (for the record, her hair looks like she already DID forgo her individual room).  If I have to hear how Lindzi is "vulnerable" one.more.freaking.time, I just might scream.

And finally, the third date, and a return of Evil Courtney.  The beginning of the date teases the audience as Ben indicates that he may have a slight misgiving about Courtney relating to the way she's treated other people...and they hop on a train, travel into Wengen, and purchase some picnic eats.  The chatter becomes a little awkward as the situation between Courtney and the other girls' relationships hits the forefront.  It even went so far as having Ben mention that he wanted to talk about it later because he wanted to enjoy the day.  It's likely just the network cleverly trying to make America feel that Courtney is finally getting the boot. As the date progresses and they have their evening 'chat' about the difficulties she's had he outright admits that the girl he has one-on-one time with is the 'girl he's falling in love with'...  Evil C apologizes and holds some accountability for her actions and Ben's ready to swish it all under the rug as he gets horned up awaiting her decision to forego her individual room (as if there was ANY doubt in the world that the skinny-dipping model would NOT jump at the chance to bare her ta-tas again and dig deeper herself!). 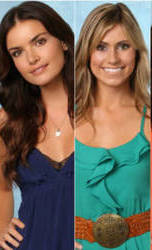 And the SHOCKER of the evening...a return of a dejected Kacie B, looking for answers.  She got a few, and planted a needed seed in Ben's head about Courtney's intentions, leaving him "utterly confused", yet he still kept her there, leaving toga-clad Nicki to walk her final walk of shame.  It's now down to Lindzi or Courtney.  He told America that he loves Lindzi-with-a-zee, and, he told Courtney personally that he was falling in love with her. Who he ends up with is anyone's guess; suppose it could be riding on who was the best individual room foregoer?  Next week's "Women Tell All" looks drama-filled, though!

All I really know after this episode is that I REALLY want to travel to Switzerland some day, and, I am seriously looking forward to watching the Titanic in 3D. And, I really don't care that Emily is our next Bachelorette.  You?
Posted by Amber at 23:17